Quadrature hybrid couplers are basic building blocks for many RF and microwave systems. For these couplers, the input splits into two output signals, of equal magnitude, with a 90 degree phase difference. Quadrature hybrid couplers provide improved input match for unbalanced loads. Energy splits evenly between outputs, and some energy is reflected back due to mismatch. For example, in Figure 1, there is a 90 degree phase difference between the two outputs, so the energy reflected at point A is 180 degree out of phase and cancels at the input port. At point B, the energy is in phase and sums at the isolated port, which is terminated. 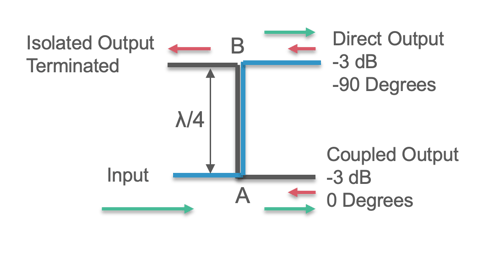 How are Quadrature Hybrid Couplers Used?

In addition to their use as power splitters/combiners (e.g. feed networks or butler matrices), quadrature hybrid couplers can be combined with identical function blocks at the outputs, as shown in Figure 2; the resulting energy will come out of the combined function output. For example, if detector diodes are used in place of the function blocks, and a drive network is provided to those detectors, it becomes an unbalanced mixer or modulator on the left hand of the diagram and a balanced mixer or modulator on the right. Alternatively, if the function blocks were diodes and a biasing network was applied (to switch the diodes on and off), the combined function output is a switch. Similarly if the function blocks are variable resistance or reactance then the circuits formed act as variable attenuators or phase shifters respectively.

Quadrature hybrid couplers are also useful in a two-device set up with dual, identical function blocks connected between them, like in Figure 2. The signal output equation is as follows:

If amplifiers replace the function blocks in Figure 2, for example, the power will divide through the amplifier, provide gain, and recombine at the output.

In the past, designers used several methods for compact quadrature hybrid couplers, each with their own benefits and drawbacks:

The primary advantage of the hybrid coupler, over other approaches (i.e. Wilkinson Power Divider), is the 90 degree phase offset in the two outputs described above. This advantage allows the user to build a balanced circuit—essential for ultimately constructing balanced amplifiers, switches, phase shifters, mixers and other key microwave building blocks.

The team at KPD is here to make sure RF system designers have the best tools possible in their toolboxes. Never hesitate to contact us.