FAQ: Do You Offer Flexible Termination on Your MLCCs?

A Brief History of FlexiCap™

To address the issues customers were experiencing with mechanical cracking as MLCCs were starting to be used in harsher environments more frequently, in 1999 Syfer, which became part of Knowles Precision Devices in 2000, released FlexiCap, a proprietary flexible epoxy polymer termination material that is applied to the device under the usual nickel barrier finish (Figure 1). MLCCs built with a FlexiCap termination accommodate a greater degree of board bending than conventional capacitors, resulting in a higher resistance to mechanical cracking. 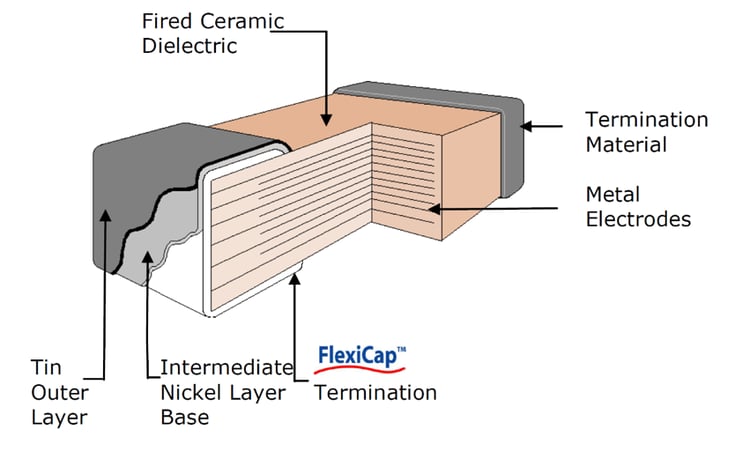 A Diagram of an MLCC built using a FlexiCap termination.

In the past two decades since the release of FlexiCap, the success of the technology has been continuously validated. First, if imitation is the sincerest form of flattery, FlexiCap has experienced its fair share as numerous capacitor manufacturers have introduced flexible terminations, some even with similar names to FlexiCap. Second, in 2008, FlexiCap received the Queen’s Award for Enterprise Innovation, which is one of the UK’s most prestigious business awards.

The Key Benefits of FlexiCap

In general, components terminated with FlexiCap can withstand greater levels of mechanical strain compared to similar sintered terminated components. This has been validated by putting FlexiCap terminations through rigorous testing for a number of key concerns and requirements for termination technology.

First, capacitors using FlexiCap terminations are subjected to bend tests to show they meet specifications such as IEC 60384-1:2001, IEC 60068-2-21: 2006, QC 321000-A001: 2007, and AEC-Q200-005. The bend tests conducted confirm that capacitors using FlexiCap terminations are guaranteed to offer 5 mm bend test reflection, which is a typical requirement for use in the automotive industry under AEC-Q200.

Additionally, as electronic design engineers know, rapid temperature changes often occur in harsh environments. These temperature swings can induce stress as a result of different coefficient of thermal expansion rates for the various materials used in a PCB, leading to cracks within components that ultimately will cause components to electrically fail. Thus, MLCCs must meet rigorous testing requirements for temperature cycling as well. In tests where MLCCs using FlexiCap were put through 1,000 cycles of -55ºC to 125ºC temperature fluctuations, neither the ceramic MLCC terminations or the solder joints cracked under the stress because the FlexiCaap can absorb some of the strain created during repeated rapid temperature changes.

Finally, one of the biggest benefits of MLCCs with a FlexiCap termination is that these components have equivalent electrical characteristics and there is no difference in performance compared to sintered terminated capacitors. Therefore, by using a Knowles Precision Devices MLCC with a FlexiCap termination, electronic design engineers can have a component with mechanical resistance that far exceeds the minimum industry standards without experiencing any unintended performance issues.