When an electrical device fails, oftentimes, the root cause can be traced to a field failure of a capacitor. While it is rare for the failure to be caused by a capacitor defect that was introduced during manufacturing, it can happen. This is especially true when multi-layer ceramic capacitors (MLCCs) are used versus other more simplistic capacitor types such as single-layer capacitors (SLCs) since the manufacturing process involves stacking many layers of dielectric and electrodes on top one another.

As a result of this layered configuration, there are a number of issues that can be introduced during the manufacturing process that are not problematic when working with SLCs. While standard electrical testing can screen out the majority of problematic parts, there are a couple common issues, mainly delamination and voids, that these tests may not always detect.

In general, the presence of delamination and/or voids in MLCCs is concerning because these defects can lead to inadequate layering of dielectrics. More specifically, delamination is a non-bonded area between layers, without loss of dielectric material, while a void is generally a flat spot where dielectric material is missing from one or more layers. These manufacturing defects can cause electrical failures because of the compromised insulation resistance, which is meant to hold charge and prevent current leakage.

Increase MLCC Reliability with Supplemental Testing for Voids and Delamination

While standard electrical testing may be sufficient for many commodity components, for applications that require higher reliability, additional non-destructive testing options that can detect voids and delamination should be considered. At Knowles Precision Devices we use a non-destructive analysis technique to check for these failure modes known as confocal scanning acoustic microscopy (CSAM). This technique uses ultrasound waves to detect changes in the acoustic impedance in MLCCs. Using different frequency pulses that travel through the various layers of the MLCCs, CSAM testing can quickly identify voids and delamination based on the intensity and polarity of the acoustic reflection, or echo, generated as the pulses pass through the component. Figure 1 shows an example of an image produced by a CSAM test. 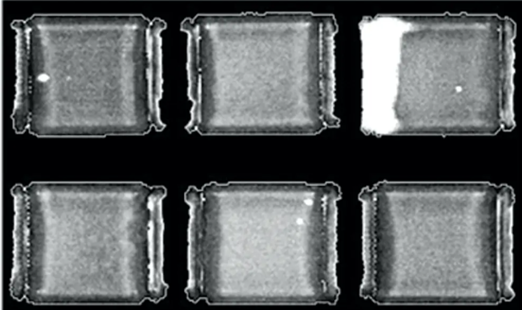 Figure 1. During this CSAM test, several small voids (white circles) and one larger area of delamination (also white) were identified in these MLCCs. Source.

For customers that require high-reliability components and would like CSAM testing performed, our standard is to test 100 percent of parts in each production run. If desired, customers can request a specific sample size or acceptance quality level (AQL) CSAM testing instead.

Learn more about our MLCC offerings or contact us to discuss our CSAM testing options.