What to Think About When Replacing Film Capacitors with MLCCs

CToday, the design and development of many applications, such as power electronics in electric vehicles (EVs), is driven largely by concerns about size and weight. This means the film capacitors traditionally used by electronics engineers aren’t always the best option. Instead, multi-layer ceramic capacitors (MLCCs) are emerging as an excellent alternative to film capacitors. Let’s review some of the considerations to keep in mind when you are deciding if making the switch is the right choice for your application.

Considerations When Moving Your Film-Based Design to an MLCC

Several factors, ranging from size and temperature limitations to flexibility and mechanical strength, should be considered when replacing film capacitors with MLCCs. Another main factor for moving away from using a film capacitor is the need to operate at increasingly high temperatures. MLCCs built using a strontium bismuth ferrum titanate (SBFT) ceramic, which is a dielectric material from Knowles Precision Devices branded under the name of Hiteca, are well suited for higher temperatures. MLCCs developed with Hiteca can withstand operating temperatures of -55° to +125°C compared to the range of -40° to +105°C, which is standard with thin film capacitors.

Additionally, when selecting a capacitor to operate at high temperatures, it is useful to understand how operating conditions can affect the capacitors working temperature. When AC (ripple) current passes through a capacitor, power will dissipate inside the component, causing energy to be wasted in the form of heat. An advantage of Hiteca-based MLCCs is that Hiteca has lower self-heating properties and low losses, which enables the capacitor to handle much higher ripple currents than conventional ceramic capacitors. 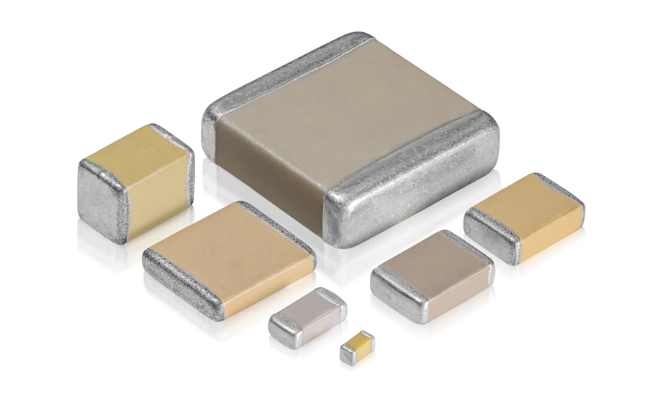 Choosing the right MLCC for your application involves considering size and temperature limitations as well as flexibility and mechanical strength.

When it comes to the ability to withstand mechanical stress in harsher environments, this is an area engineers are typically concerned about when using MLCCs. At Knowles Precision Devices, we address this concern with Flexicap, which is flexible termination technology we developed. Flexicap is a polymer termination that has a fibrous structure that effectively reduces the mechanical stress being exerted onto the ceramic section of the capacitor by approximately 50 percent. AEC-Q200 certified components terminated with FlexiCap have a higher resistance to mechanical cracking, and offer a guaranteed 5mm bend test deflection, which meets the demand by far exceeds the minimum industry standard for flexibility.

Increasing Overlap in Voltage and Capacitance of MLCCs vs. Film Capacitors

Recently, MLCCs have seen significant improvements in voltage and capacitance capabilities and are increasingly overlapping the capabilities of film capacitors in certain applications. For example, the trend in power electronics applications towards higher switching frequencies reduces the amount of capacitance required, which moves many applications into that region of overlap where MLCCs can compare to film.

Overall, MLCC technology has come a long way in recent years to make it competitive with, and in many cases better, than film capacitors. Concerns over the ability of MLCCs to operate reliably at higher temperatures and withstand cracking in harsh environments have been negated through technological advances, such as Hiteca and Flexicap. Thus, MLCCs are now a perfect solution to help reduce the overall footprint of a power subsystems without sacrificing system capabilities or reliability.

Learn more about using MLCCS by downloading our whitepaper, Considerations for Selecting Automotive-Grade MLCCs in EVs