Welcome to the Capacitor Fundamentals Series, where we teach you about the ins and outs of chips capacitors – their properties, product classifications, test standards, and use cases – in order to help you make informed decisions about the right capacitors for your specific applications. After describing dielectric properties in our previous article, let’s discuss some interesting characteristics of ferroelectric ceramics. 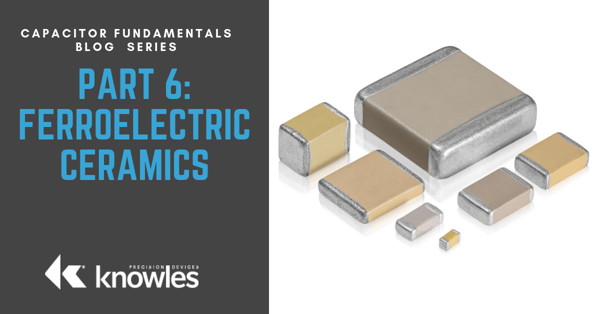 Here is a step-by-step breakdown of the ferroelectric hysteresis loop with regards to polarization versus applied electric field (see in Figure 1b):

Further cycles of the electric field retrace the original path, creating a continuous hysteresis effect. In order to reach zero polarization at 0 volts (point A) again, the dielectric must be heated past its Curie temperature to generate a new system of random ferroelectric domains.

The hysteresis loop actually varies in shape with temperature. At lower temperatures, there is less thermal motion of atoms, so a greater electric field is required to orient the domains. At high temperatures, the applied field required for polarization decreases until it becomes nearly linear at the Curie point. 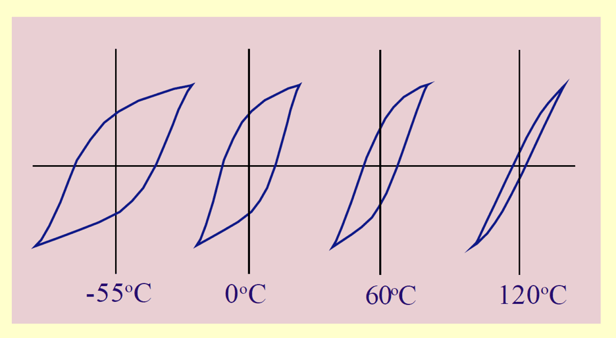 This is caused by the different phase transformations that barium titanate goes through at different temperatures, as seen in Figure 3. At the 120°C Curie point, the material transforms from a non-polar cubic to a polarized tetragonal structure. Upon further cooling, a change from tetragonal to orthorhombic occurs at 0°C, which then transforms to the rhombohedral crystal habit at -90°C. 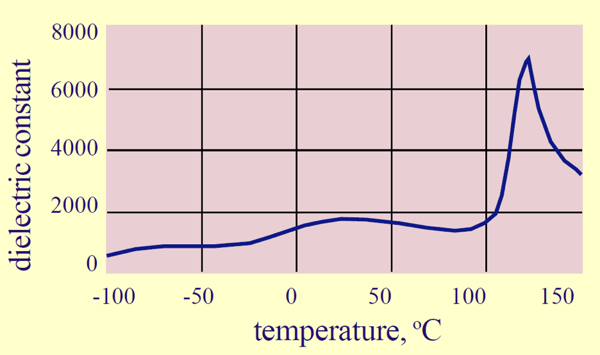 Fortunately, other elements can be incorporated into the BaTiO3crystal structure to modify its properties. Lots of research has gone into optimizing these materials, with the hopes of altering the dielectric behavior and temperature dependence of barium titanate.

“Shifter” additives such as SrTiO3and CaZrO3are used to shift the Curie point such that the high K properties of the ferroelectric work at or near room temperature, whereas PbTiO3is used to transfer the Curie point to higher temperatures. “Depressors” such as MgZrO3and Bi2Sn3O9depress the dielectric constant peak at the Curie point to provide a more stable K value over temperature. Other additives affect the microstructure by isolating or reducing the ferroelectric grains, thus decreasing the dielectric constant, aging rate, and piezoelectric effects. Much effort has gone into optimizing these materials and using them in careful proportions to maximize the usefulness of the dielectric for practical applications.

Hopefully, Part 6 gave you a better understanding of ferroelectric ceramics and how their properties may affect your specific application. In Part 7, we’ll be diving into non-ferroelectric, linear dielectrics and their unique behaviors. Also, check out our Knowles Precision Devices Capacitors to view our complete product offering.