Welcome to the Capacitor Fundamentals Series, where we teach you about the ins and outs of chips capacitors – their properties, product classifications, test standards, and use cases – in order to help you make informed decisions about the right capacitors for your specific applications. After describing linear dielectrics in our previous article, let’s discuss the different types of dielectrics.

Different dielectric materials all have their own characteristics and practical uses. Generally speaking, there is a trade-off such that dielectrics with a higher dielectric constant K have greater losses and less stability in terms of temperature, voltage, and time. Dielectric formulations are classified in the industry by their temperature coefficient of capacitance (TCC), or how much capacitance changes with temperature. Class I and II are commonly used for making ceramic chip capacitors, while Class III is used for making disc capacitors.

The Electronic Industries Association (EIA) Standard 198 defines a letter-number-letter code to describe the temperature coefficient of Class I dielectrics as follows:

The most common Class I dielectric for chip capacitors is the C0G designation (emphasized with red text in Table 1) and is also known as NP0 (negative-positive-zero) in the U.S. military (MIL) specification for its flat temperature coefficient. It has an allowable capacitance change of ±30 ppm/°C over the -55°C to 125°C operational temperature range.

C0G is stable with voltage, has negligible aging, and has a DF at a maximum of 0.15% (which is less than the X7R dielectrics that are described below). When operating at high frequencies, this lower DF means that the power lost in the capacitor is reduced and the component is less prone to overheating. In general, C0G dielectrics have K values of between 20 to 100 and are used to make stable, lower capacitance parts in the picofarad (pF) to nanofarad (nF) region. They are typically used for filtering, balancing, and timing circuits.

Ferroelectric formulations are categorized as Class II dielectrics. They offer much higher dielectric constants than Class I dielectrics, but have less stable properties with regards to temperature, voltage, frequency, and time. The diverse range of properties of the ferroelectric ceramics is split into two subgroups, defined by the temperature characteristics:

X7R (emphasized with red text in Table 2) is one of the more commonly used Class II dielectrics. The ‘X’ and ‘7’ define the lower and upper operational temperature range (i.e., -55°C and +125°C respectively). The ‘R’ defines the stability within the temperature (i.e., ±15% tolerance). The DF is a maximum of 2.5%, and the aging rate for X7R is about 1% to 2% per time decade (which means that, at 1% aging, 2% of the capacitance value will be lost between hour 10 and hour 1000). X7R has a high K value of around 3000 and is used for capacitance values in the nF to microfarad (µF) range. With these characteristics, X7R are commonly found in energy storage, smoothing, and filtering applications. 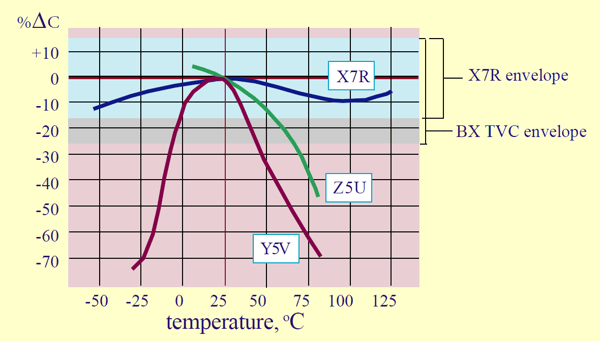 Hopefully, Part 8 gave you a better understanding of dielectric classifications and how their properties may affect your specific application. In Part 9, we’ll be diving into capacitor test parameters and electrical properties. Also, check out our Knowles Precision Devices Capacitors to view our complete product offering.