As early adopters of beamforming technology in the 1960s, aerospace and defense organizations have a lot of experience using the initial large-scale active electronically scanned arrays (AESAs) for military radar tracking applications. But these arrays aren’t as convenient for some applications today as the operational frequencies of the targets of interest for many military applications are increasing. This means the wavelengths of the signals that need to be monitored are getting shorter and these radar applications need denser arrays since antenna spacing needs to be set at one half the wavelength. For example, at 25GHz, the wavelength in free space is approximately 12mm (0.47”), leading to half-wave spacing for antennas of 6mm (0.24”). Also, as arrays become denser, the new challenge for RF system designers is avoiding interference in these tighter spaces, especially when transmitting signals.

Therefore, there are a number of benefits that fully digital beamforming can potentially bring to many emerging military applications – especially those in the electronic warfare space. First, at a high level, fully digital beamforming has a dedicated analog-to-digital converter (ADC) for every antenna element. This allows the array to simultaneously acquire and transmit multiple beams, and beams can be split in various directions at the same time without having interference issues and all while improving dynamic range.

Additionally, with a fully digital beamforming array, each antenna element is software defined. This means the “job” each element needs to do can be individually controlled and tuned, making it possible to use one system for multiple missions. This is important for limited-space environments like the ship shown in Figure 1 since one array can serve as a multi-function device with antennas pointing in different directions. This leads to a more efficient use of space while also achieving more comprehensive radar coverage without interference issues. 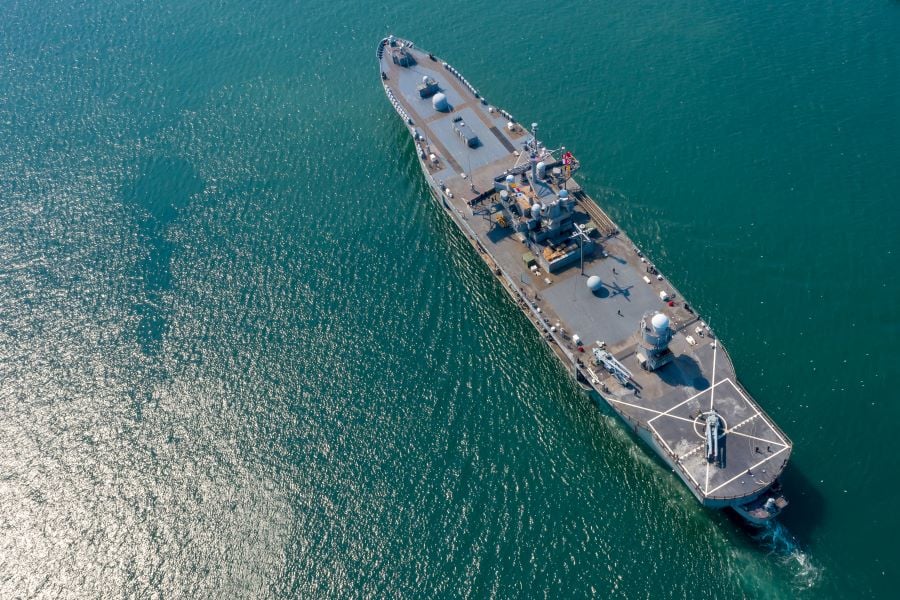 Figure 1. An aerial view of a naval ship that includes various electronic warfare and radar systems on board.

But, implementing fully digital beamforming means you need to integrate small form factor, yet high-performance, passives such as filters, capacitors, and resistors. Table 1 shows the relationship between dielectric constant and wavelength at 25 GHz for three common dielectric materials as well as three custom substrates developed by Knowles Precision Devices (PG, CF, and CG).

Table 1. This table shows how wavelength and dielectric constant are inversely proportional.

It is critical to work with a supplier that has the knowledge to seamlessly integrate multiple passive components into a single circuit and fully understands the miniaturization of passive RF components to enable fully digital beamforming. With these types of custom high K dielectrics, we are leading the way in circuit miniaturization. We also have extensive experience working with customers in the aerospace and defense industry and bringing our miniaturization techniques into emerging applications such as those needed for today’s electronics warfare devices.

Read our latest article in Aerospace and Defense Technology to learn more about our approach to fully digital beamforming for electronic warfare applications.